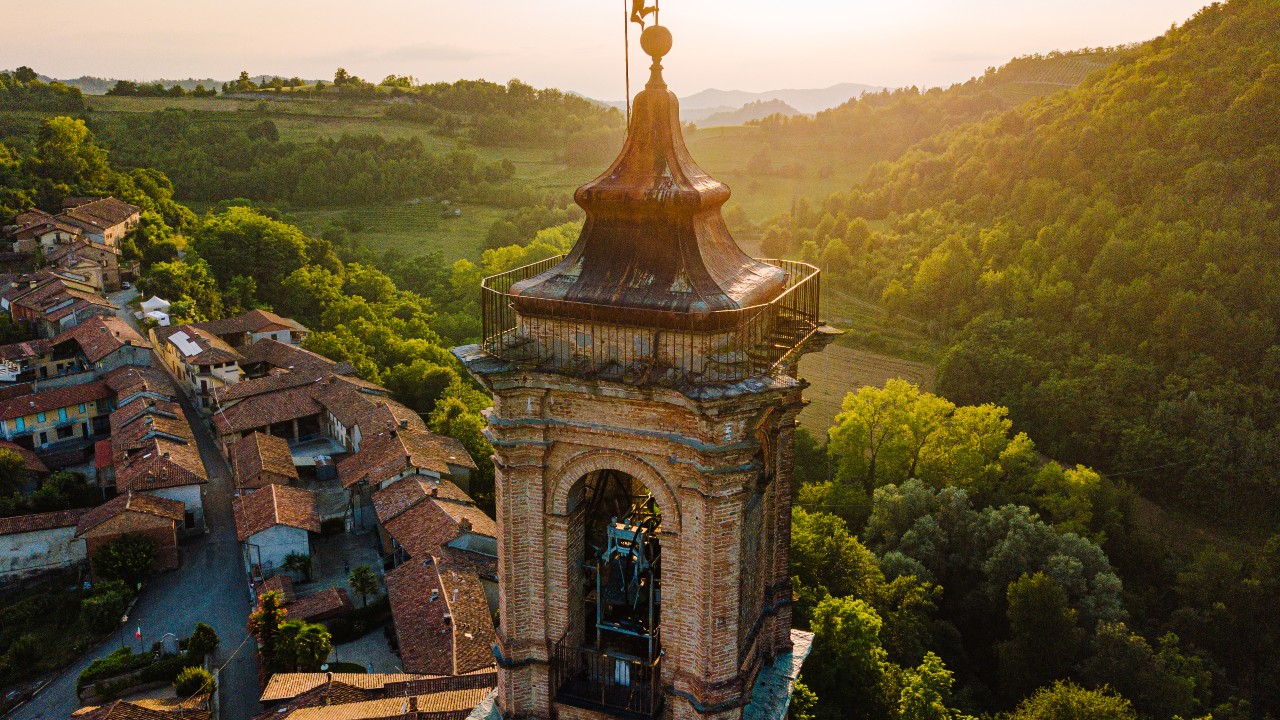 Astigiano refers to the area around Asti. It is a journey through time, an exciting discovery, an archeological exploration of Italian Medieval history. Hills, woods, Romanesque churches, villages that come from past eras, secluded yet spectacular. And all around, stretches of vineyards.

The only large town among these hills is the capital, Asti, which seems to be grounded in another dimension. A series of cobbled streets, towers and churches built in that Gothic-Romanesque style that is typical of the area: red bricks and pale yellow (almost white) sandstones.

Red and yellow are the colors of Monferrina, the traditional female mask of Monferrato, where the Astigiano is located. And unsurprisingly, these are also the colors of the earth. Red clay, due to the presence of iron, is mainly found in the plains and is an element that form soils rich in organic substance that are highly suitable for the cultivation of cereals, legumes, vegetables and fruit-bearing trees. And yellow Asti Sands (named after the town) that formed following the sedimentation of a shallow sea in ancient times and are the ideal soil to produce great wines.

The typical yellow-red color of the buildings of the Asti area (Asti, San Secondo)

THE BORDERS OF THE ASTIGIANO

The Astigiano almost coincides with the Province of Asti, boasting an arched shape that represents the first ridges of Monferrato and include two other famous wine territories: Roero to the west and Langhe to the southwest. Its western tip, between Villanova and Montechiaro d’Asti, borders the area of Chieri, in the province of Turin. From North to South, the Astigiano reveals fascinating contrasts. There are plains near Chieri, crossed by the Po River and its park, a true paradise for cyclists. Near Roero are gentle and elegant hills planted with vines that extend from San Damiano d’Asti to Moncalvo, the first strip of the boundless ridges of Monferrato. And down south, the landscape changes drastically: near San Giorgio Scarampi, we almost reach the Ligurian Apennines. Rugged hills and wild woods, vineyards that leave room for hazelnut groves and villages with little traces of man, immersed in the silence of impenetrable hills.

FROM THE SEA TO THE WINE

We need to talk about the area’s geology in order to understand the characteristics of the wines produced here. First, we must imagine this area, about 4 million years ago, as a thriving tropical coast. From the nearby Langhe, which had already emerged, streams flowed towards a large inland sea (Padano Sea), of which the Astigiano represented the shallowest parts near the beaches. The streams carried debris, often reduced to sand and pebbles, which accumulated on the seabed. This is the origin of the Asti Sands, which can still be seen in the soil made up of fine and gravelly sands, with rounded clayey pebbles. Here in the Astigiano, just like in Roero, the earth is rich in fossils, accumulated in the sandy-gravelly layers, especially calcareous remains of mollusk shells.

>> Read our entry on Roero

Clays, sands and limestone are the ideal components of soils that yield wines with perfectly balanced body and aromas. Clayey soil endows the grapes with structure, the sands enrich aromas and limestone helps the development of the right wine acidity.

If we put these characteristics together (outstanding structure, aromas and acidity – which brings “freshness” to the wine, the kind to entice for another sip) it’s not hard to see why the Astigiano is home to an exceptional vine that reaches the highest quality here. We are talking about Barbera, a generous and adaptable grape that requires a great deal of work in the vineyard and careful processing in the cellar in order to achieve excellence.

Duchessa Lia produces two Barbera d’Asti Docg wines that embody two different shades of the Astigiano: Barbera d’Asti Docg and Galanera Barbera d’Asti Docg Superiore. The former can be considered as an “introductory” Barbera that exclusively ages in steel and immediately reveals the pleasantness of this variety. It is fruity, full and bright, standing out for its freshness and excellent sip that make it perfect for an entire meal.

On the other hand, Galanera is a «Superiore» because it undergoes a longer and particular aging. After fermentation, it is left to rest partly in barrique and partly in large barrels. A carefully dosed process that enriches the texture of the tannins naturally present in Barbera, making it delicate and enveloping with light hints of spices and berries. The result is a noble yet pleasant wine that unveils the great Barbera grape in all its vibrant elegance. An outstanding wine for pairing that can withstand time.